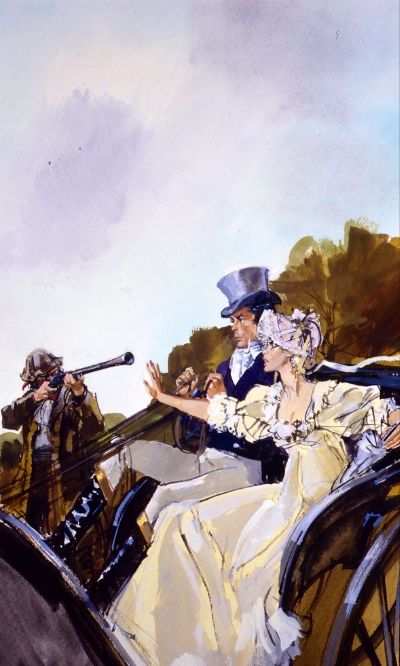 Queen’s Ford, built in the reign of Queen Elizabeth and home to the noble Forde family for centuries, is crumbling into ruin. Devastated by the reduced circumstances in which he finds himself due to the outlandish spending of his late father, the current Lord Fordcombe simply cannot afford to repair it. With only a few loyal servants to serve the family, even the once beautiful gardens and stables are shabby and unkempt. In fact the Forde family, blue-blooded and aristocratic, who have entertained more than one English Monarch during their illustrious past, are now so poor that they struggle to find money for food. Driven beyond endurance and crushed by the monotony of poverty, Jeremy, the handsome twenty-one year old son of Lord Fordcombe decides that something desperate must be done. Artfully persuading his eldest sister, Mariota, to sacrifice her principles and go along with his daring plan, she joins him in holding up a coach masquerading as highwaymen. But as the usually honest and kind Mariota catches a glimpse of the terrified woman they are robbing, she knows that this is something she should never have allowed. About to call off Jeremy, who is wild-eyed with excitement and oblivious to the upset he is causing, she suddenly sees a gentleman taking aim with his gun behind her brother. In a split second she fires, blinded to the consequences of her actions through her love for her brother. As the dust settles on the lonely road she realises that the handsome Earl of Buckenham is injured and, eager to avoid the gallows, the subdued siblings bring him to their home to heal. Desperately sorry by the trouble they have caused, Mariota proceeds to nurse him better, praying for forgiveness and willing the Earl to improve. But the unforeseen dramas that arise from that one action alter the lives of everyone involved forever.