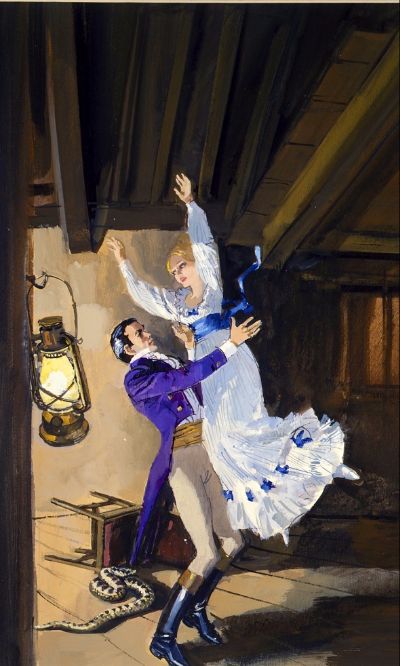 The lovely young orphan Sedela Craven is very excited to hear that the Marquis of Windlesham is returning home from active service in the Duke of Wellington’s Army in France at the end of the long war against Napoleon Bonaparte. He, however, lingers on in London with his beautiful lover Lady Esther Hasting, an exquisite yet unscrupulous woman who is unfaithful to him while striving to ensnare him into marriage for his riches and his celebrated title. Informed of this by her Nanny, Sedela dresses up as the Windles’s family ghost, Lady Constance, who appears as a warning whenever the family is in danger. Entering the Marquis’s bedroom at midnight through a secret passage she warns him that he is in grave peril from a woman who is unfaithful to him with a man he trusts as his friend. To his fury the Marquis soon discovers that the ghost’ spoke the truth when he catches Esther in bed with his friend. It is only back at his estate preparing with Sedela for a lavish party for his family and friends that he begins to realise what his heart truly desires and it is Sedela. But it seems that it is too late, for she has been kidnapped and faces death at the forked tongue of a deadly cobra. The only hope is that the Marquis can rescue her in time to save her life and their love!