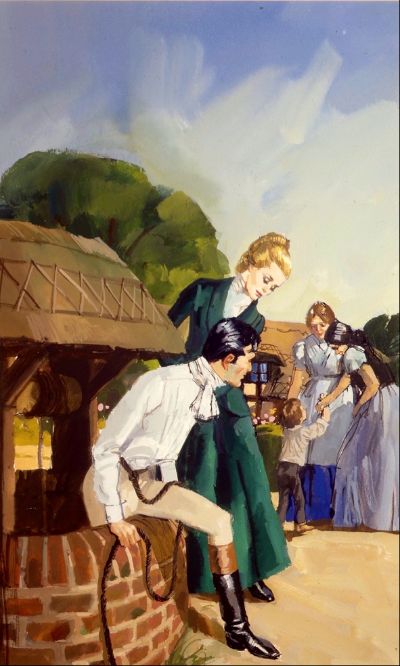 The Duke of Laverdale is ambitious to be appointed Master of the Horse and the new Queen Adelaide is determined that behaviour at Court should be moral after the licentiousness of King George IV. The Duke therefore ends his affaire de coeur with the enchanting Lady Sybil Mersham and drops his ballet dancer mistress as well. Up to now he has been determined not to be married, but he now decides to become respectable and find a suitable bride as befits his standing. As he has always avoided debutantes, he asks the Marquis of Coleburn, whom he has known since he was a boy, to help him. The Marquis is delighted and tells the Duke that he has the perfect wife for him in his beautiful daughter Oleta, who would have been a debutante by now but for family mourning. The Duke arranges to visit the Marquis, who returns home to tell his daughter that she is a very lucky girl. Oleta, however, is horrified at the idea of marrying a man she has never seen and who obviously cannot be in love with her. She is very romantic and loves the country especially the woods, which have a magical influence on her and she talks to them when she rides through them on her beloved horse, Apollo. When the Marquis tells her that she cannot refuse the Duke, even if he has to drag her to the altar, Oleta runs away to her old Nanny in Norfolk, having no idea of the dangers she might face on the journey. When the Duke arrives to stay with the Marquis, he is appalled to learn that, because she is afraid of him, Oleta has ridden off on her own. He then follows her as he has a much faster horse than anyone else. How the Duke finds Oleta in a dangerous predicament and how he saves her. How, not knowing who he is, she is impressed by his intelligence, his kindness and his bravery. And how, when they finally escape from horse-thieves, he takes her to a place where they can be alone and how there they can both dream the same dream of love, is all told in this thrilling romance by BARBARA CARTLAND.