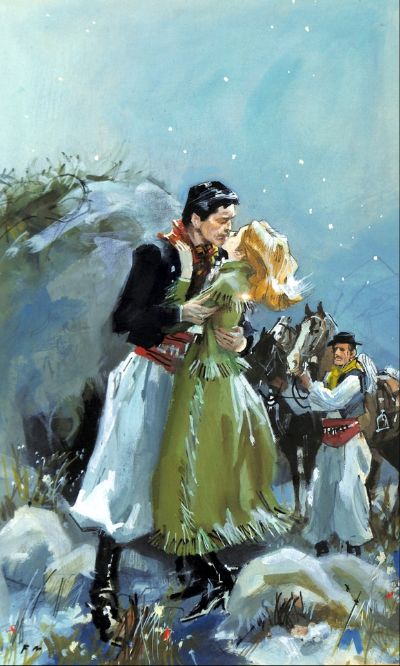 After Cañuela’s father, Lionel Arlington, a senior Diplomat at the British Embassy in Buenos Aires, was wrongly accused in Argentina of being a traitor to Britain, he died, presumed drowned, after diving overboard to save a little girl who had fallen into the sea . The resulting scandal left the beautiful Cañuela and her ailing mother ostracised and outcast in London, living in a bare bedsitter under an assumed name. Although she now despises all Argentines, Cañuela is so desperate to earn money to be able to send her mother for a cure in Switzerland that she takes a job as secretary and translator to a famous Argentine businessman, Ramón de Lopez a man who her mother says was among her father’s accusers and a former friend of his. So with no idea who she really is, her almost impossibly handsome employer is baffled by her intense animosity and curtness, even though she is very efficient at her job. Even more so when they travel to Buenos Aires and she saves Ramón de Lopez from scandal, helps him to further his political ambitions to be President of Argentina and finally rescues him from murderous guerrilla kidnappers, who intend to ransom him off for a huge amount of money. And it is here, at the height of peril and danger to herself, that Cañuela begins to realise that the powerful passion in her heart is no longer hatred but love.