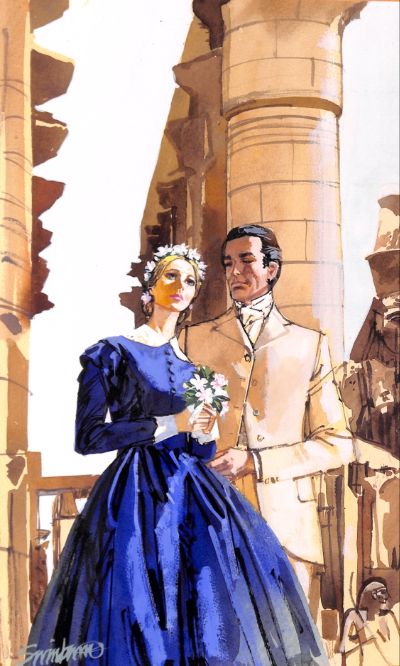 Young, handsome and very rich the Marquis of Harlington has just ended yet another unsatisfactory love affair that has left him feeling bored with women and resigned to the fact that true love simply does not exist amongst the upper class echelons of London, which are his usual habitat. Casting around for a speedy escape route he is offered the prefect exit when the Prime Minister asks him to travel to Egypt and report on the Suez Canal, which is currently under construction. Delighted, the Marquis visits his neighbour, Lord Durham, and is horrified to overhear him threatening to beat his daughter Delisia unless she agrees to an arranged marriage with an ugly, but rich French Comte. Leaving Lord Durham’s house in a state of moral outrage, the Marquis is aware that there is a blue ribbon peeping out of the box at the back of his chaise but decides not to investigate until he is well away from the wrath of Lord Durham. Upon discovering the beautiful Delisia, who is the owner of the ribbon and running away from her dreadful father, he agrees to take her with him to Egypt masquerading as his young niece. But Delisia is a young woman full of surprises. Not only is she fluent in Arabic, she is also intelligent and blessed with the gift of second sight. Arriving in a politically volatile Egypt, Delisia quickly becomes indispensable despite her young age. But is the Marquis merely fascinated by her views of life and unusual intellect? Or are his feelings deepening into something that he believes would never happen to him?