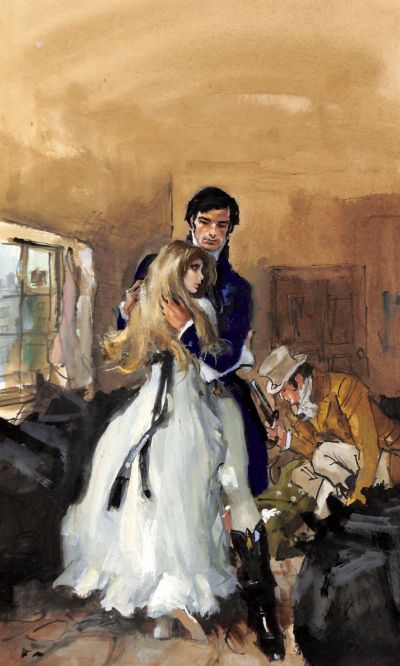 Tania, the lovely daughter of the late Lord Amesly, leaves her school in Paris and is travelling to Boulogne when her train crashes. Amongst the fear and confusion she is helped and befriended by a charming young Englishman Captain Rupert More and with him she reaches the ferry where she unexpectedly meets two friends of her late parents, Charles and Selina Bracebridge. Captivated by Tania, and awed by her bravery in the face of adversity, Rupert is convinced that she is uniquely special. Tania, innocent in the ways of love having spent so long in her convent school, is similarly smitten by the dashing young Captain. It seems that Cupid’s bow has struck in the most unusual of circumstances, but as the young couple get to know each other their happiness is shattered by the threat of war in the Crimea. Promising that she will wait for him, Rupert prepares himself for the battlefield. Back in London Tania’s hostile stepmother makes it clear that her stepdaughter is no longer welcome in her own home. Eager to discharge her duties as legal guardian, the second Lady Amesly decides the easiest way is to marry her pretty stepdaughter off as quickly as possible. So when Lord Watford, an eligible widower with a shady past, asks for Tania’s hand in marriage, her stepmother is determined that the answer will be yes’. Terrified at the idea of having to marry someone she does not love, and wishing that Rupert were still close by, Tania runs away to the Bracebridges and begs them to help. The Bracebridges are close friends of Florence Nightingale, who is determined to recruit nurses to look after the troops wounded in the war. Joining Florence and training as fast as she can, Tania secretly leaves England, following Rupert to the frontline. As war breaks out and the casualty figures rise, Tania works tirelessly in the British Military Hospital in Scutari. With every newly injured soldier arriving needing care and comfort, Tania eagerly scans their faces hoping to see her lost love, and begs for news of Rupert. Will they find each other again? And if they do can their love survive the horrors of war? Or will Lady Amersly discover her whereabouts and demand that she return home to marry a man she neither loves nor respects? Tania will need all of her courage and belief in the powers of true love for the challenges ahead.