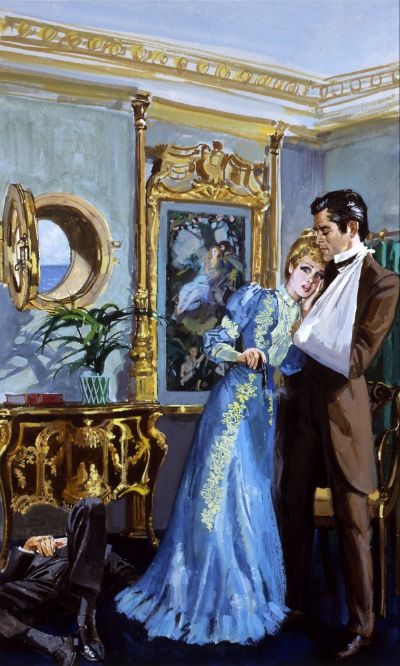 Since his beloved wife’s death, Sir Robert Royden finds it unbearable to stay at home in his ancestral Manor House and instead spends his nights drinking and gambling away the family fortune in the low spots of London, leaving his beautiful young daughter Crisa to her own devices and her adored horses. One day, after a long absence, he brings to their home an American millionaire, who wants Crisa’s hand in marriage in return for a large sum of money that will keep her, the family estate and her father in comfort in perpetuity. And so poor Crisa is virtually forced into marrying him and then finds herself in a golden cage’, trapped at the huge and ugly New York mansion of the aged Silas P. Vanderhault. When her husband dies suddenly after a stroke on the Liner to New York, she is besieged by his grasping family, who have been cut out of his will as he has left everything to Crisa. She carefully prepares her plan and then manages to make her escape from them by using a false name and passport to voyage back to England on a French luxury Liner. Mid-Atlantic and by pure chance she meets a mysterious, handsome but temporarily blinded man in one of the best suites on the Liner, who needs her help as a secretary for his correspondence. And in a matter of days, she is in love A love that surely is doomed from the very start!