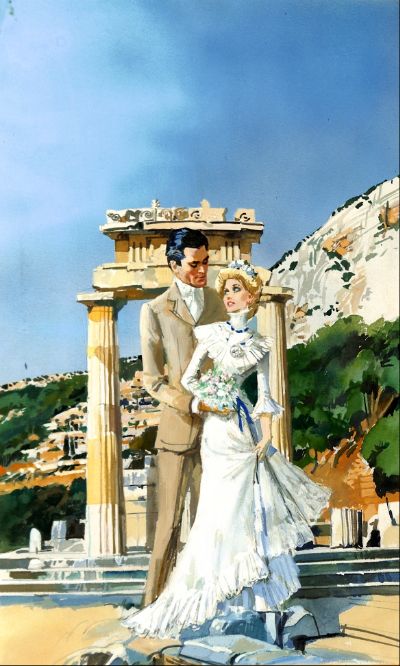 The beautiful young Corena Melville is horrified when a sinister Greek man with the name of Mr. Thespidos calls on her at her home to announce that he is holding as his prisoner her beloved father, Sir Priam, a prominent archaeologist and an expert on Ancient Greek antiquities. Without Corena to help him, Sir Priam is presently in Greece excavating around the Temple of Athena where he is confident of finding a long lost statue of the Goddess Aphrodite, which is obviously coveted by Mr. Thespidos, who will sell it to the highest bidder on world markets. What is worse is that the only way that she can save him from torture and death is by travelling to Greece with the wealthy Lord Warburton, an avid collector of Greek treasures, from whom they aim to extract the whereabouts of other ancient statues they want to steal and then sell. In effect she is to be the bait in the wicked trap set for Lord Warburton. When Lord Warburton refuses her request for passage to Greece on his yacht to go to her father, the kidnapper smuggles her secretly on board. She is discovered and, initially angry, his Lordship is soon utterly bewitched by her and sees as the Aphrodite he has sought all his life. For what the evil kidnapper does not reckon with are Corena’s knowledge, beauty and intelligence and indeed the all-conquering power of love!