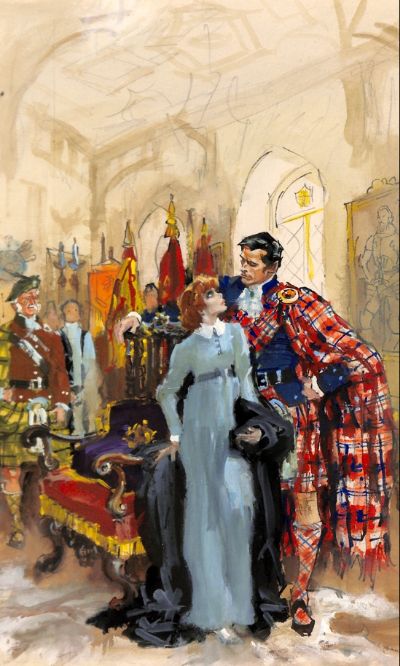 Waif-like and half-starved the beautiful eighteen-year-old Tara has no second name and no family. Orphaned when her mother died tragically in a carriage crash, she was raised in the appalling Orphanage of the Nameless’ in London and has no knowledge at all of the world outside. The drunken Matron of the Orphanage, Mrs. Barrowfield, relies on Tara to control, feed and look after the many orphans while she spends most of the money intended for their food on drink. Then one day Mr. Falkirk comes to inform her that the Orphanage’s owner and patron, the Duke of Arkcraig, has ordered her to Scotland to work in Castle Arkcraig. Arriving, timid and overawed to meet her new Master, she is appalled to find that she has been seriously misled. She is there not to work as a servant but to become the imperiously handsome Duke’s bride willing or not! All of a sudden she is embroiled in the terrible enmity between the McCraig Clan and the equally warlike Kildonnons and the curse that hangs over them like a black cloud. Worst of all, she finds that she has lost her heart to the husband for whom she had never asked and yet who now seems to be cold and aloof. Has she been rescued from poverty and the horrors of the Orphanage and brought to the Duke’s majestic Castle only to spend a lifetime starved of love?