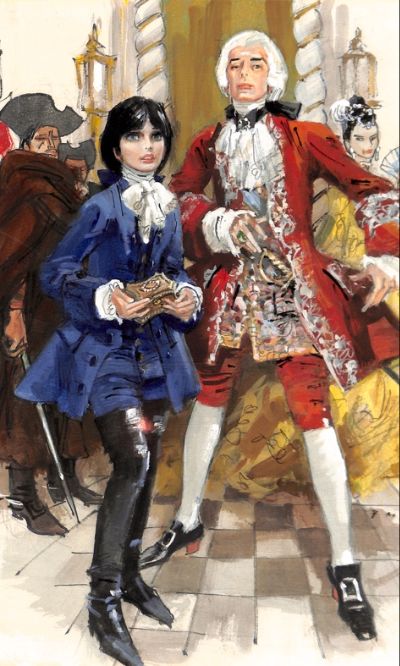 There is something strangely noble and also delicate about the emaciated young ragamuffin boy that the handsome Hugo, Lord Lynke, finds himself employing as his new page on his undercover mission to Spain on behalf of the King of England. The page he has brought with from England had just been taken ill and so has to return home. The boy’ is named Venturo. In fact he’ is Ventura the lost daughter of a noble and rich Spanish dynasty. Lord Lynke’s task is to marry the richest and most beautiful woman in Spain to ensure peace between the two countries which are invariably at war with each other. She is the proud, imperious and dangerous seductress Doña Alcira and this marriage would prove no great challenge for a Nobleman of Lord Lynke’s calibre and renown. Except that he faces Don Carlos, a powerful and unscrupulous suitor determined to erase any competition for Doña Alcira’s hand. She has a glamorous and dangerous matador as her current lover and employs a besotted and sinister dwarf who she uses as her assassin. The sweet adventure soon turns sour. And when young Ventura overhears those who would murder the Lord of her heart, she realises that her own heart has no life without him.