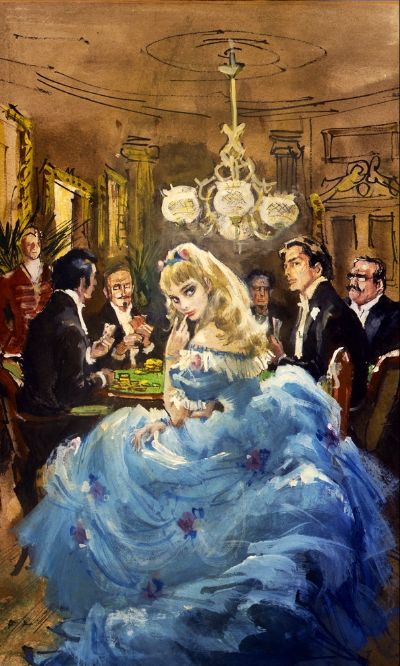 Wendi has struggled alone to keep the family’s crumbling ancestral home, Creswell Court, going. Her brother, Robbie, now Lord Creswell, is spending his time in London where he is a great success in Society and with the Prince of Wales and the beautiful ladies who surround him. The Prince has suffered from not being allowed by Queen Victoria to take any part in ruling the country and in compensation he goes from one attractive woman to another. He especially enjoys secret weekend house parties at his friends’ country houses usually a party of ten and each gentleman brings with him a lady of his choice. To Robbie’s consternation the Prince of Wales suggests he should visit Creswell Court where he had heard the pictures are outstanding. Robbie is horrified, but he cannot refuse and so he rushes home to tell Wendi that the Prince is to be their guest for a Royal house party. Wendi asks the obvious question as to how they can afford it and to her alarm Robbie takes down two valuable pictures, which are entailed, telling her he has found an artist to copy them so cleverly that the Trustees will not realise the originals are missing. Wendi manages to clean up the house while Robbie unexpectedly meets a beautiful young woman who says she is married. Robbie offers to help her and is instantly attracted to her. How Wendi is rewarded for making the house habitable and comfortable for the Prince of Wales and how he finds the house party is even more amusing than he anticipated. And how the secret weekend provides love in a very special and delightful way for both Robbie and Wendi, is all told in this romantic tale by BARBARA CARTLAND.