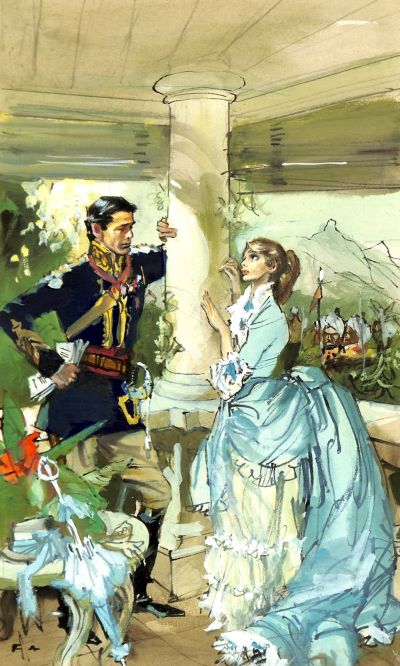 Almost identical in their golden-haired, blue-eyed beauty and similarly named, cousins Antonia Toni’ Combe and Latonia Hythe are nevertheless very different personalities. Desperate to avoid a journey to India forced on her by her stern uncle, Kenrick Combe, the new Lord Branscombe, and which would prevent her marrying the man she desperately loves , the flirtatious and capricious Toni beseeches her cousin to take her place as her Uncle Kenrick has not seen Toni for many years. So conscientious Latonia nervously accepts the pretence, assumes the role of her cousin and then sets sail with her stern protector for India. Berated and frowned upon by his Lordship for her cousin’s misdeeds’, Latonia nevertheless looks forward to the adventure of visiting and seeing India, until her deception is revealed to his Lordship’s fury! But, when she overhears a sinister plot to kill him, she rushes in the night to warn him and is rewarded with a passionate kiss, she suddenly knows that it is not hate but love that burns in her heart love for a man who must surely despise her forever