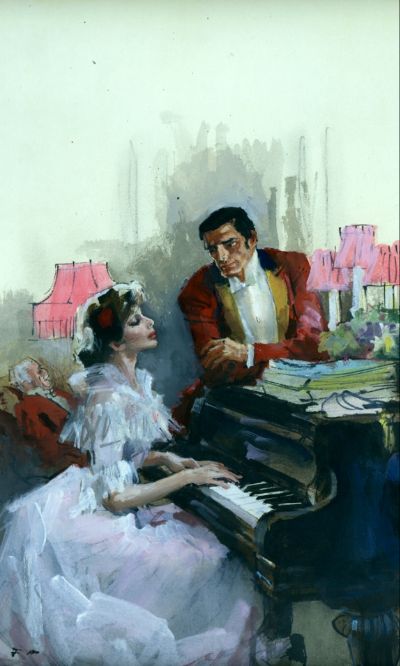 Carina was alone in the world and unsure of what the future held for her. Then a troupe of musicians, called ‘Bertie’s Beauties’, had an accident outside her gates and she found herself swept up in their fate as she took over from their injured pianist. Now one of the troupe, she went to perform at the Duke of Westbury’s castle, never suspecting that the Duke would turn out to be the young man she had met for a few dramatic moments many years before. To hide her identity she allowed him to see her only when she was masked. He soon became so intrigued that he made advances to her. Horrified that he should consider her a woman of loose morals, Carina fled the castle and became a full time member of ‘Bertie’s Beauties’. If she could not find love, at least she could fulfil her gifts as a musician. Knowing she could never marry the man she loved, she agreed to marry Bertie, who had fallen in love with her, although he know her heart was given to the Duke. But the Duke had never got over her desertion and he was determined to find her. What happened when they met again is told in this intriguing and romantic novel by Barbara Cartland.