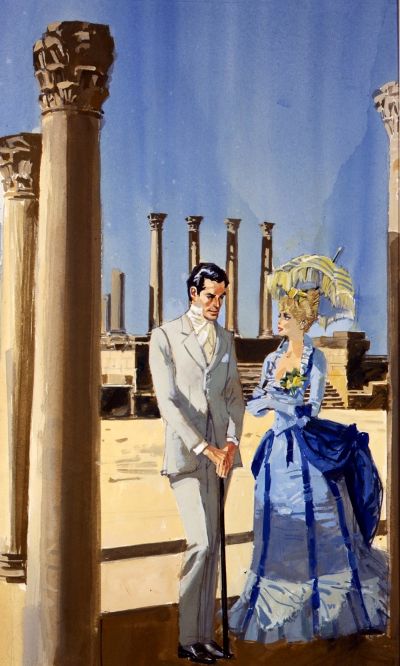 The beautiful young Mimosa Shenson is left alone in the world, penniless and stranded in Tunisia after her father dies from a snakebite while visiting the partially excavated archaeological site of Thuburbo Maius. Whatever can she do? The answer appears to be in a chance reading of a local newspaper reporting that her cousin Minerva, who has been living a grand Villa near Tunis, but has suddenly disappeared and is feared kidnapped for her large fortune. Feigning amnesia Mimosa arrives at her cousin’s Villa and, as she hopes, is instantly taken for the missing Minerva and, as the two girls are very alike, even the servants believe her to be Minerva. Unexpectedly the Duke of Alrock, a handsome Englishman, comes to call at the Villa and he too mistakes Mimosa for Minerva. Quickly Mimosa finds that her deceit is bringing her complications in the form of a sinister Frenchman who attempts to blackmail her about her cousin’s illicit affaire de coeur with a married French Count, which she knows nothing about. Then the Duke persuades her to accompany him on a visit to the magnificent ruins of Thuburbo Maius and there they are kidnapped by a gang of ruffians just as the sun is about to set. It seems that Mimosa is about to lose her life, just as she is beginning to lose her heart to the dashing Duke of Alrock.