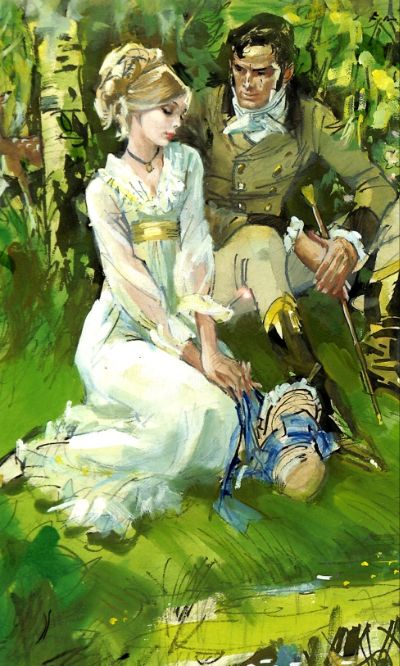 When Justin, the tall and handsome Marquis of Alton, comes to the rescue of an elfin young beauty named Sylvina, whose dog, Columbus, has been wounded by a snare in the woods on his estate, he is instantly smitten by her beauty and innocence, so unlike the scheming and worldly wise ladies of the Social world in London. Of course Sylvina does not know that he is the Marquis of Alton, just that he is her Knight Errant’ and saviour when she most needed one. And, when he suggests that they repair to Alton Park, he is dismayed to find that she is terrified by the idea of meeting the Marquis. He is even more appalled when, after the idyllic time they had spent in their private woodland Eden, Sylvina refuses ever to see him again. What the Marquis does not know is that Sylvina is being blackmailed into marriage to the unsavoury Mr. Cuddington, the Under-Secretary of State for Foreign Affairs. Only when Cuddington himself is exposed for betraying his country to Napoleon Bonaparte and the French does the Marquis realise that Sylvina has loved him from the second they had first met. And more and more he is falling in love with Sylvina and now he is determined to set her free from the demons surrounding her, even if he has to kill to do so!