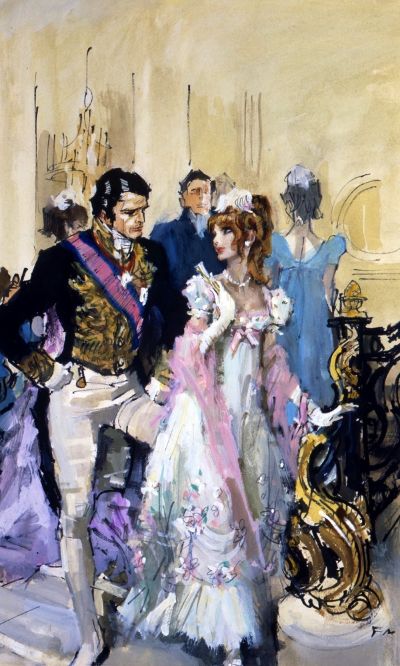 Princess Caterina of Theiss receives a letter from her close friend Princess Henriet of Istria asking her to stay with her immediately. The two Provinces were close to each other and part of Austria. On arrival at the Palace in Istria, Princess Caterina is horrified to hear that, owing to the Russians’ threatening behaviour in the Balkans, the Emperor of Austria has written to Queen Victoria asking her to send an English husband for Princess Henriet so that the Union Jack can fly over Istria and deter any greedy predators. The Russians at the time are a great menace to all Europe and are especially anxious to acquire access to the Mediterranean, which Istria could easily provide. The Duke of Dunlerton, whose mother was Princess Alice of Saxe-Coburg and therefore Royal has been sent by the Queen to marry Princess Henriet. But Henriet tells Caterina that she is already madly in love with Fritz Hofer, a tall handsome Officer in her father’s best Regiment. Rather than marry anyone else, she insists to Caterina that she will kill herself! To save her friend from suicide, Caterina agrees that Henriet will escape with the man she loves and she will take her place and marry the Duke without him or anyone else realising what is happening. How Caterina does so successfully. How she is terrified of what will happen when the Duke discovers that he has been made a fool of and is now married to the wrong Princess. How they are all afraid of Queen Victoria and what she will say when she learns about Caterina’s deception. And how, despite her sacrifice for her friend, she unexpectedly finds the love she has been hoping for and praying for all her life is all told in this exciting story by BARBARA CARTLAND.