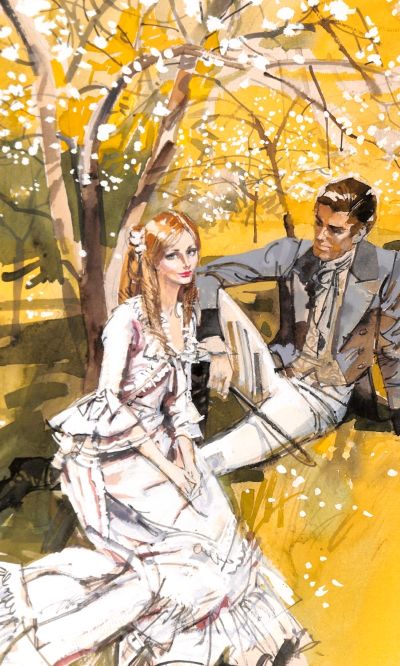 The tenth Earl of Narbrooke is a miser.He is obsessed with money and is prepared to starve himself as well as his household and will not give a penny to his family even though he is the Head of it.He has locked himself away in his vast mansion and neglects the estate until it becomes a disgrace.Colonel Euan Campbell, who had been wounded in the War with Napoleon, is very hard-up and accepts the position of managing the Earl’s horses. He is given a cottage for his wife and his daughter, Devona, aged thirteen. The Colonel is killed by a wild horse that the Earl insists on buying because it was cheap and, as they are destitute, Mrs. Campbell and Devonia are taken into the big house so that they can help the servants although they are not paid.Mrs. Campbell dies of pneumonia in the unheated house while Devona stays on. Then one morning the miserly Earl is found dead from a stroke and Devona sends a message to the next Earl who lives in London. Before he arrives, however, she finds the Earl’s will in which every penny he possesses is to be buried with him. Because she is terrified that the new Earl will be like his brother, she burns the will, thinking that if the money goes to the family they will help her. When the new Earl does arrive, he is the miser’s nephew and to Devona’s surprise he is young, tall and handsome and when he asks the beautiful Devona who she is, because she is so scared, she says that she is the daughter of his uncle. How after the funeral the new Earl visits the Bank and finds that his uncle has left a huge fortune of one million pounds. How Devona is stunned to learn that as she is the next of kin, the money goes to her. How she comes to an arrangement with the new Earl and how because it leaks out that she is the heiress she is terrorised by a fortune-hunter, but eventually finds love is all told in this unusual story by BARBARA CARTLAND.