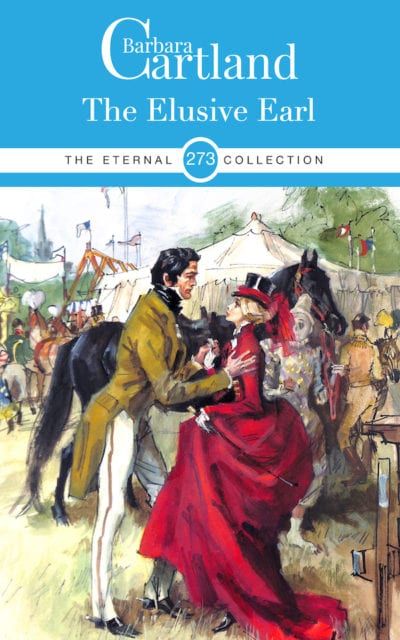 When a startlingly beautiful young girl with brilliant red-golden hair falls at speed from her horse before him, the dashingly handsome Osric, Earl of Helstone, is uncharacteristically caught off his guard.
Not only one of the richest men in England but also, in many women’s opinion, by far the best-looking, ‘The Elusive Earl’, as he is known, is accustomed to Society beauties falling at his feet – but not in so literal a fashion!
Rushing to her aid, he finds that the girl has not fallen – but made her horse throw her deliberately in a cunning ruse to talk to him without her groom being aware of it.
She introduces herself as Calista, the headstrong daughter of Lady Chevington and warns the Earl that he must decline her mother’s invitation to stay at her estate for the duration of the Epsom Races, claiming that her mother is bent on duping him into marrying Calista.
Laughing at the claim, the Earl accepts the invitation to Chevington Court – and in no time finds himself tricked into a compromising position, the only escape from which is marriage to Calista as she had warned him.
But just as he begins reluctantly to accept that he must marry the young beauty who, after all, shares his passion for horses, Calista disappears and, at the request of a surprisingly frantic Lady Chevington, the Earl goes in search of her.
Finally finding her and her beloved horse performing in a circus, he tries to bring her home, but falls foul of a vicious ‘Strong Man’ and is terribly injured.
And, as she patiently nurses her saviour back to health, Calista realises that she is in love.
If only the Earl felt the same way too.