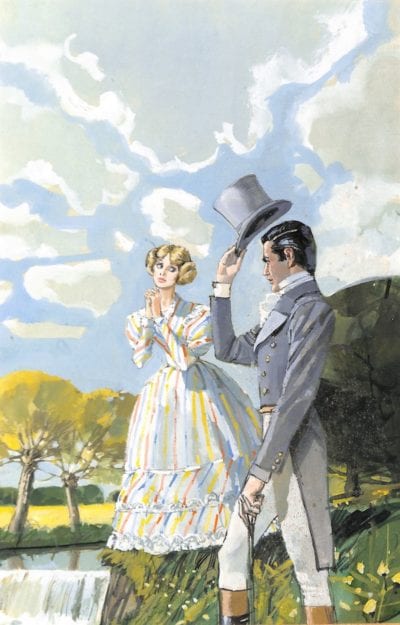 Handsome, distinguished and decidedly dashing, Theo, the Duke of Eaglefield, has the world, and most of its women, at his feet. But he takes all this attention for granted and is becoming tired and bored by it all.
In fact his friend, Harry Hampton, tells him that he has no concept of the challenges and complexities faced by the ordinary man and that the people he encounters see only his riches and rank rather than the man himself.
Protesting that this is untrue, Theo accepts Harry’s challenge to walk the fifty miles from Brighton to his house, Eagle Hall, in Berkshire incognito and mixing with commoners along the way. He stands to lose his finest pair of horses should he fail and so he sets forth, leaving behind the glamour of Brighton’s Beau Monde.
The second morning of his pilgrimage, Theo comes across a beautiful young girl, Alysia, standing precariously at the edge of a deep pool next to a weir. She seems to be praying and, instinctively, he knows that she is about to plunge to her death in the river.
After leading her to safety he hears all about her cruel and grasping stepfather who murdered her mother and who is now bent on seizing her sizeable inheritance by marrying her off to his friend, Lord Gosforde with whom he will share the spoils.
Theo is transfixed by Alysia, thinking it quite ‘impossible for anyone to be so beautiful’.
Almost instantly he finds himself falling in love with this ‘very young angel who has fallen out of Heaven by mistake’ and he decides to take her on his journey on foot.
But can he keep Alysia away from her murderous stepfather and be able to reach the safety of Eagle Hall unscathed?