265. Stand and Deliver your Heart 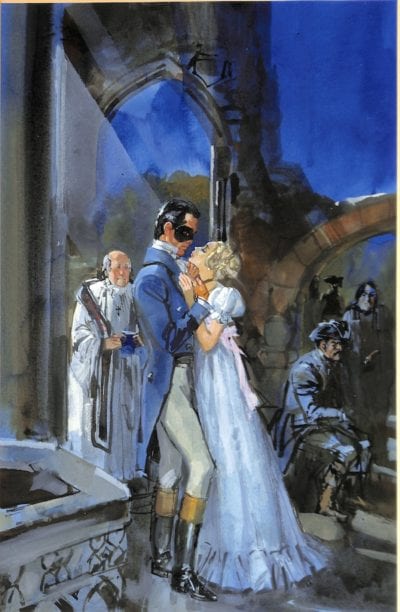 265. Stand and Deliver your Heart

Neil, the handsome Earl of Wynstock, is expected back from the English Army of Occupation in France where he has been with the Duke of Wellington since the Battle of Waterloo. And the people of his estate, Wyn Park, await his return to them impatiently.
Vanda Charlton, his beautiful childhood neighbour, waits with more concern than the others because, unbeknown to anyone else, a dangerous gang of highwaymen have moved into the West wing of the Earl’s ancestral home after intimidating and threatening the caretaker and his wife.
Vanda fears that on the Earl’s return the highwaymen will capture him and hold him to ransom.
Intercepting him at a local inn, she warns the Earl and persuades him to enlist the support of the soldiers at the local Barracks. But before the Military can implement their plan of action, the ruthless renegades kidnap Vanda, threatening to kill her if they do not receive one thousand pounds by the next morning.
Disguised in a highwayman’s mask, the Earl arrives in the enemy’s woodland camp in the dead of night with a cunning plan to rescue Vanda. Posing as another highwayman he enlists the local Parson and stages a Wedding claiming that he is marrying Vanda for her huge fortune, which he promises to share with the villains.
Little do they, or even Vanda herself, know that he is as deeply in love with Vanda as she is with him.
And that this marriage is completely legal and utterly real!