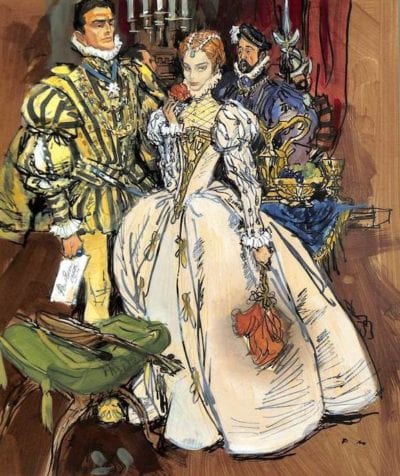 At her father’s request and on the instructions of the Royal Council of Scotland, flame-haired young Scottish beauty, Sheena McCraggan, sails in Junre1554 to France to become a companion to the fourteen-year-old Mary Stuart – Mary Queen of Scots – at the Court of the French King Henri II.
Once there she is to report on the young Queen’s intentions and those of the French Court regarding the future of Scotland and specifically whether it will support Mary’s rightful accession to the Throne of England.
When she arrives, Sheena finds that her mission is far more difficult and dangerous than anyone at her home had ever imagined. She is overwhelmed by the intrigues of the Courtiers and everybody seems to be hating everyone else in a very unhappy Palace.
Not only is the French Court a seething nest of depravity and corruption, the deceitful aristocrats close to King Henri exploit innocent young Sheena in an evil Black Magic plot to ensnare him.
Amid the darkness, as she finds herself prone on the Satanic sacrificial Altar, the one light of hope is the Duc de Salvoire to whom Sheena has lost her heart.
But will God answer her prayers and send him to her rescue in time to save her soul?