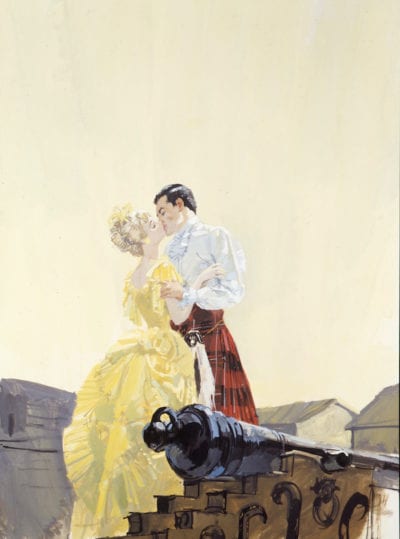 Although Scottish born and bred, beautiful young Vara McDorn speaks with a refined English accent thanks to her education in the South, which is why she is called upon to become Reader to the new Chieftain of the McDorn Clan, who has been blinded by an Indian Fakir’s curse while protecting the Viceroy at a Fort on the North-West Frontier of India.
Troubled by his affliction and frustrated by his inability to understand the local Scots’ brogue, the Chieftain, the Earl of Dornoch, soon comes to rely on Vara as his tutor in the customs and attitudes of his people as well as being his eyes on the estate.
And, although he is terse and resentful at first, Vara finds herself warming to this haughtily handsome Nobleman.
After taking him on an adventure that she hopes will restore his sight, Vara catches Hamish, the Earl’s murderous relative, a rival for the title of Chieftain, attempting to stifle him with a pillow over his face and shoots him with her revolver, saving the Earl’s life.
Already Vara knows that she is in love with the Earl, but even as she prays frantically for his blindness to be cured, she frets and worries that he could be disappointed when finally he is able to see her.