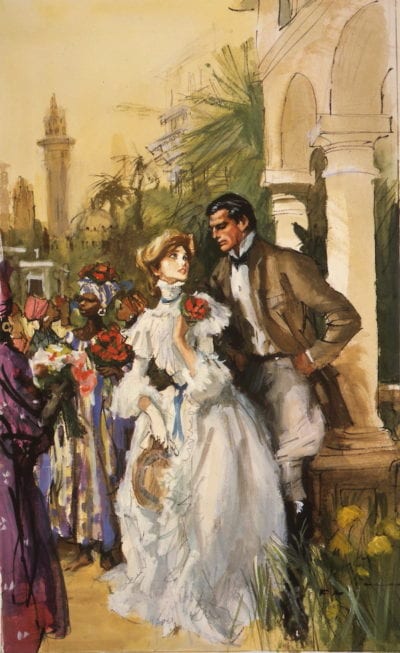 Pretty young Kelda Lawrence arrived at Mrs. Gladwin’s Seminary for Young Ladies when she was fifteen, coming from the orphanage where she was sent for three years after her father and mother were tragically killed in an earthquake travelling in Turkey.
At the Seminary she makes a firm friend in the beautiful Yvette de Villon who, although also an orphan, is from a wealthy French extended family.
One day Yvette comes to Kelda feeling tearful and distraught because she has been summoned to go and live with her English uncle.
This, Kelda thinks, does not sound so bad until Yvette explains that her uncle is ‘horrible’ and worse still lives in Dakar in the French West African Colony of Senegal as a recluse in a huge mansion..
When none of the school’s Mistresses agree to accompany Yvette, to Kelda’s amazement the Headmistress instructs her to go with her to Senegal and look after her until she can be handed over safely to her uncle in Dakar.
And so begins Kelda’s great adventure – and, when Yvette falls head over heels in love to a good-looking young man on the voyage, she and her new beau enlist Kelda in their plan to gain the acceptance of Yvette’s uncle to their marriage.
There are severe problems when they arrive in Dakar as Yvette’s uncle has already promised Yvette’s hand in marriage to the Governor-General.
Little do any of them know that Kelda too is soon to lose her heart!