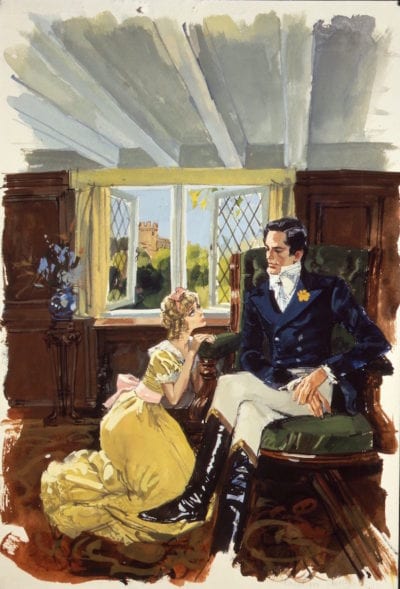 Beautiful young Marista Rockbourne and her even more beautiful sister, Letty, live an impoverished life in a small house on the estate with its sublime Castle that belonged to their family until her father foolishly lost everything to the dashing Earl of Stanbrook in a game of cards before drowning himself in the sea in shame.
After more than a year in Dovecot House, to their horror the sisters and their brother, Anthony, receive a letter demanding rent arrears from the Earl’s Agent and reluctantly Marista agrees to visit the Earl, now ensconced in The Castle, and beg him for mercy.
To make matters even worse she loathes the Earl – in the sisters’ view he is raffish and wicked and they think of him as an ogre, blaming him for their father’s untimely death.
When Marista does finally meet him, she finds that he is very handsome, polished and haughty.
And she finds as well that it becomes harder to hate him after he rescues her when the amorous Lord Dashforth forces himself upon her.
Then, when inadvertently Anthony brings a French spy and assassin to Dovecot House on a mission to kill the Earl, it is Marista who discovers his plan and warns the Earl.
And with his grateful kiss for saving his life she realises that her hate has turned into love.
If only the imperious Earl felt the same way –