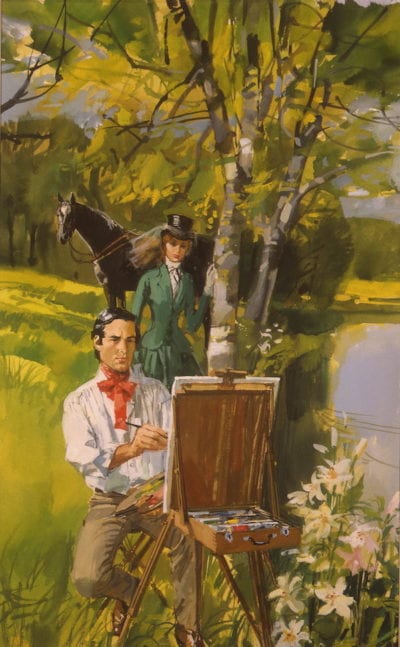 Beautiful, flame-haired eighteen-year-old Princess Thea is horrified when her father, the King of a Balkan country called Kostas tells her that she must marry the old white-haired King Otho of the next door State.
Thea feels strongly that she cannot marry him as he is so old and she has always believed that her dream Prince Charming will one day come and find her, they will fall madly in love and become a part of each other for ever.
So she decides to run away from The Palace taking her beloved stallion, Mercury, with her.
She soon finds herself lost in the wooded mountains of Kostas. There by chance she meets an overwhelmingly handsome artist called Nikōs, who seems to be able to read her thoughts with no effort.
And almost instantly the two fall in love and Nikōs invites her to visit some local Hungarian gypsies, who ignite her passions by playing wild romantic music.
But then a gang of bandits takes them prisoner and fearing what these wicked men might do to Thea, Nikōs tells them that she is his bride.
The ruse is successful and, after their escape from the bandits, the couple make the untruth the true with a Wedding Service in an entrancing woodland Church straight out of a Fairytale.
But how will Thea be able to explain to her Royal family that she is now married to an artist she met in a wood – ?