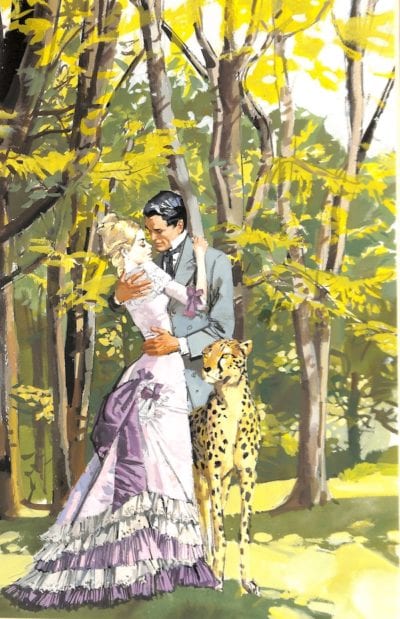 The beautiful Ilesa Harle and her father, the Honourable Mark Harle, the Vicar of the village of Littlestone, are finding it difficult to ‘make ends meet’, owning little of value other than the run-down Vicarage that they live in and the two fine pictures by the famous painter of horses, George Stubbs, that they have inherited.
The lovely Ilesa, therefore, lives a simple sheltered life with her father unlike her glamorous and worldly half-sister Doreen, who has been widowed and has inherited her husband’s vast riches
And Doreen aims to further her ambitious social career by marrying the dashing and aristocratic Duke of Mountheron, who curiously is a collector of George Stubbs’s paintings as well.
The trouble is that Doreen has been caught in the arms of one of her lovers by an unsympathetic man who is sure to tell tales to the Duke and then ruin her prospects of marrying him.
Doreen begs Ilesa to cover for her and tell the Duke lies that she was at the Vicarage at the time in question when she was not there.
But, when the Duke arrives at the Vicarage and then invites the Vicar and both daughters to stay with him in his fine house called Heron Court, Doreen is beside herself with jealousy – and even more so when it becomes obvious that the Duke is falling in love with ‘the wrong sister’.