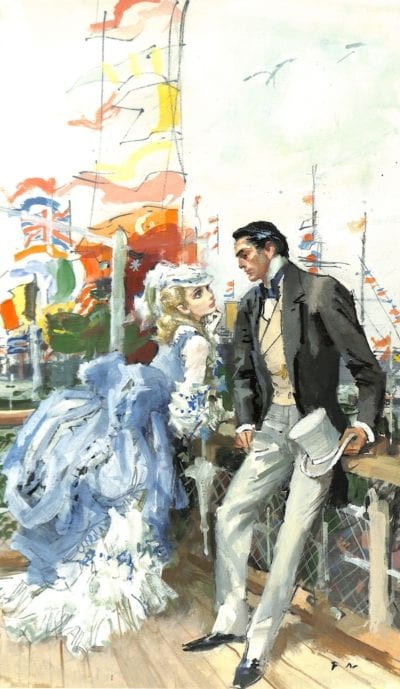 Not only has the beautiful eighteen year old Bettina Charlwood lost her beloved mother but is made all but destitute by her father’s constant gambling and she has to leave the French school as her deceased Godmother had financed her fees.
Now death strikes once more as her chaperone dies on the ferry from Calais to Dover in a wild storm. And Bettina, not knowing what to do, is saved by an earnest young gentleman whose name is Lord Eustace Veston.
Arriving home she finds that she and her father are invited by the famous Duke of Alveston to accompany him on a trip in his luxurious yacht to Egypt with a large party for the historic Opening of the Suez Canal in 1869.
Another surprise awaits her when she finds that the Duke has invited his half-brother as well, whom her father hopes that she will marry. And that half-brother is none other than her Good Samaritan at Dover, Lord Eustace Veston himself.
But while Bettinna finds the Duke almost impossibly handsome and awe-inspiring, Lord Eustace by contrast reveals himself to be a mean-spirited ‘do-gooder’ – and something of a bully to boot.
In addition he has developed a deep hatred for the Duke and he has set his heart on inheriting his title and huge fortune by any means.
And, despite Lord Eustace’s assumption that Bettina will happily marry him, she soon finds the magnificence, generosity and great charm of the Duke very hard to resist.