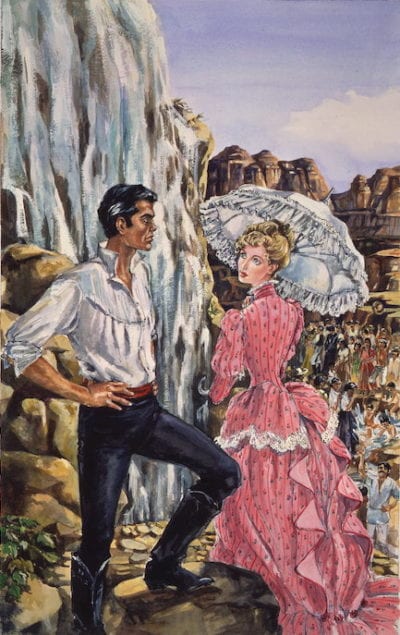 Orina Vandeholt is young and beautiful and, after the death of her very successful and much-loved millionaire American father, she finds herself extremely rich.
To escape her grief, she decides to travel on her father’s new modern yacht to the Gulf of Mexico and one day stops off at a small town called Sadaro.
There Orina is invited by two local boys to go riding with them on fine Mexican horses and, when she agrees to their suggestion, a wild adventure begins.
After being knocked out with a drugged cup of coffee, she finds that she has been duped. The boys have kidnapped her on the orders of their leader – a handsome charismatic man the people have named ‘Juarez’ after an old Mexican hero.
But it is not ransom he seeks for Orina, as she suspects. He desperately needs her money to build a dam that will end a long harsh drought and save the lives of his many starving people.
And to obtain that large sum of money, he intends to marry Orina!
Orina is furious, but there is nothing that she can do about as she is now his prisoner.
However very soon the plight of Juarez’s people melts her heart as well as the children’s hungry faces.
When at last the water flows profusely from the dam and Juarez is about to set her free, she realises that he has become the captor of her heart!