227. Temptation of a Teacher 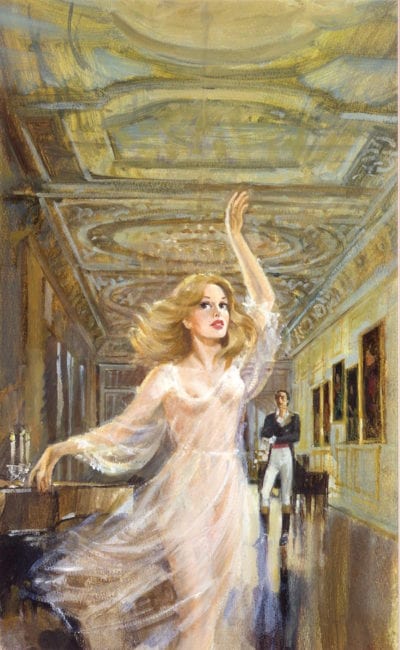 227. Temptation of a Teacher

Shortly after the death of her father, the Earl of Weir, the stunningly beautiful Lady Arletta is penniless, having been ousted from the family estate by her cousin, who has now inherited everything from her father.
Desperate to escape the misery of her situation, she is heartened to hear that her close friend, Jane Turner, is to be married very soon to the new Bishop of Jamaica. The trouble is that at the same time she had agreed to travel to France to be the Governess to the children of the Duc de Sauterre’s late brother and to teach them English.
Jane is in a serious quandary as she cannot possibly let her fiancée down nor can she disappoint her new employer, the Duc.
But Arletta has dreamed up a solution for them both.
So that Jane is free to get married, Arletta will travel to the Duc’s Dordogne Château posing as Jane!
On arrival at the enchanting Château, she finds the Duc as surly and rude as he is handsome. Worse still he hates the English and she struggles to win him over while resisting the attentions of the Duc’s dashing but sinister cousin, the Comte, who has a very doubtful reputation locally.
And soon, despite herself, Arletta finds herself losing her heart to the haughty Frenchman who despises everything she stands for.
And who, surely, can never feel anything for her but contempt?
Read more
BUY NOW
Share