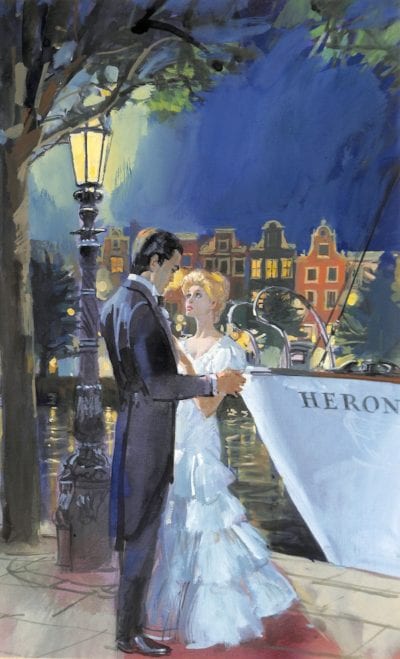 Handsome, athletic and pursued by women wherever he goes, it is hardly surprising that the tall striking Marquis of Kyneston succumbs to the temptation in London of a married beauty called Daphne Burton.
Finding out purely by chance that she intends to entrap and blackmail him in a cynical plot, he decides that he must escape the Society world and so he heads off in his yacht for The Hague in Holland in search of great Dutch art to complete his prestigious Picture Gallery, which the King himself is taking considerable interest in.
In the meantime someone else is also destined for the Dutch City at the same time.
Beautiful young Lela Cavendish is mourning her mother’s death when her stepfather, Sir Robert Lawson, sends for her.
Arriving at the family estate she is appalled to find that he has arranged for her to marry a wealthy much older and extremely unpleasant man whom she has only met twice let alone loves.
Lela and her beloved Nanny flee to Holland to throw themselves on the mercy of her ailing aunt, the Baroness van Alnrardt.
And soon in The Hague’s Mauritshuis Museum Fate strikes when an art dealer stops to admire Lela’s excellent copy of Vermeer’s Head of a Young Girl and suggests to Lela a terrifying course of action.
And that is to defraud the famously handsome Marquis of Kyneston with her copy of the Vermeer Masterpiece.
But she and the Marquis find out soon enough that there other attractions in Holland besides Dutch paintings.
Read more
BUY NOW
Share