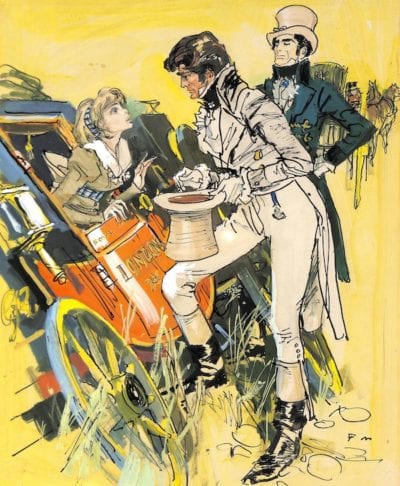 After her stagecoach collides with the Marquis of Stade’s speeding curricle on the road to Blackwater, slender golden-haired beauty, Gretna Hayden, is somewhat at the mercy of this cynical-lipped yet handsome Nobleman.
Knowing this and concerned for Gretna’s reputation, her companion and chaperone, the rotund Mrs. Merryweather, passes her off as her niece when they arrive at his magnificent nearby Stately home.
Sadly the Marquis seems to take her lowly status as an excuse to proposition her in way that he would never dream of treating a Society lady.
Little does he suspect that Gretna is the daughter of just such a lady and one with a scandalous past and illustrious connections of her own – namely with The Prince of Wales’s consort, Maria Fitzherbert, or Aunt Maria to Gretna!
The gossip-mongers in the late 1780s were all speculating that the Prince and Mrs. Fitzherbert had been secretly married and purely by chance Gretna found that it was indeed true.
Gretna hates the steely-eyed and supercilious Marquis with his sarcasm and curled lip, especially when he has the temerity to suggest that Mrs. Fitzherbert’s residence in the smartest part of London is an unsuitable place for a young girl like Gretna to be staying.
But then his arrogance pales into insignificance compared to the vile predatory Lord Wroxhall, who pursues Gretna mercilessly until finally love comes out of hiding for the Marquis and his golden-haired Gretna.