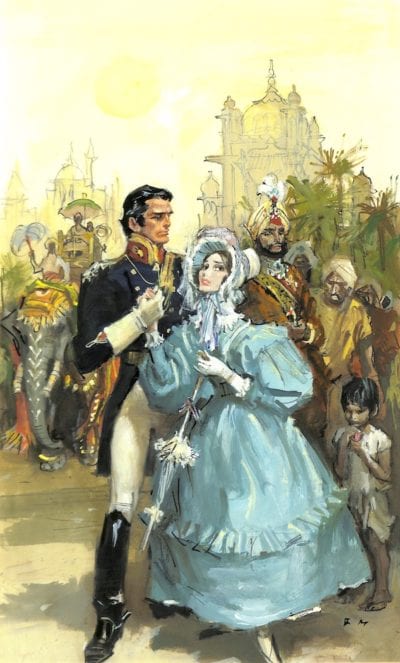 When Bengal Lancers Major Iain Hadleigh first encounters the beautiful young Brucena Nairn it is on a moving train in India as he forces her back into the carriage to protect her from serious rioting on the platform.
Far from being grateful, Brucena is outraged, having no idea that she is contravening Major Hadleigh’s own orders that no Europeans may travel to the forbidden area of Saugor.
She is on her way to join her cousin, Captain Sleeman and his wife, Amelie, intending without their knowledge to work as a Nanny to their as yet unborn child and thereby escaping a fault-finding father who hates her for her beauty and for not being the boy he so desperately needs for his estate and Castle in Scotland
But Brucena soon finds far more to fear under India’s searing sun.
First the unwanted attentions of the somewhat sinister Lord Rawthorne and, worse still, the devotees of Thuggee – highway murderers who strangle their victims from behind with a yellow silk scarf –
It is only when, rescuing her in the darkness from the clutches of would-be murderers and Iain’s lips fall on hers, that Brucena realises that she has been in love with the dashing and handsome Major all along!