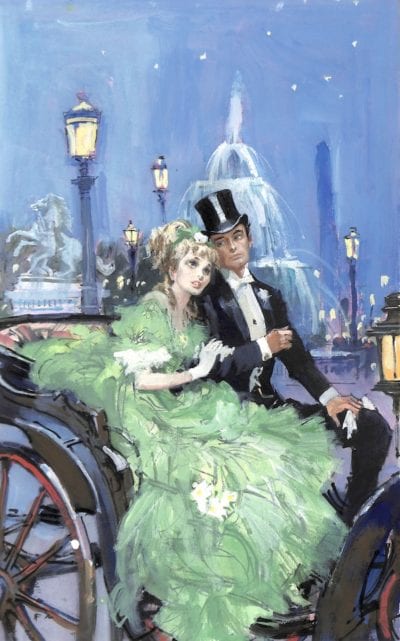 Since her mother’s death, the beautiful but innocent Linetta Falaise has led a sheltered life under the wing of her kindly French Governess.
So she is heartbroken to find that her beloved Mademoiselle is at death’s door and that she, Linetta, had unknowingly been living off her meagre savings for the last two years.
As she now has no money, there is no alternative but for Linetta to travel to Paris and ask Mademoiselle’s niece, Marie-Ernestine, to help her find suitable employment, perhaps teaching English to French children.
Almost as soon as she boards the cross-channel Steamer heading for Calais, her innocent eyes are opened to the wicked ways of the world when a strange man’s unwanted and frightening attentions drive her to seek the protection of a handsome and noble stranger, the Marquis of Darleston, who is travelling to Paris on a secret mission for the British Prime Minister.
After they part company, Linetta is introduced to the heady glamour of Paris Society by the glamorous Marie-Ernestine, who is really the celebrated and infamous Blanche d’Antigney.
Linetta is appalled by Les Grandes Cocottes, who sell love to the highest bidder, especially since she is expected to join them because she is so young and enchanting.
Afraid, alone and beset by lecherous ‘gentlemen’, Linetta remembers the handsome distinguished Marquis she met on the Steamer and prays fervently that he will come to her rescue yet again.