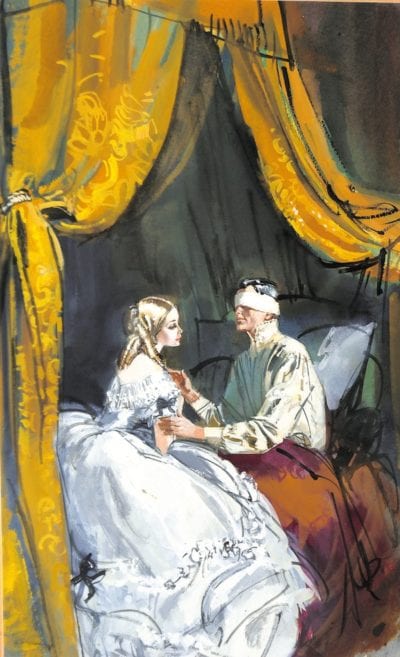 The lovely Sacha Waverley, the daughter of an impoverished country Vicar, who is a brilliant Greek scholar, is almost as beautiful if in a very demure way as her cousin, Lady Deirdre Lang, who is much more sophisticated and worldly.
So when Deirdre visits her at the Vicarage with a very strange request, Sacha finds herself perplexed by her domineering and demanding cousin.
For Deidre has fallen in love with Lord Gerrard and is desperate to join him at his house party. The trouble is that she is already secretly engaged to the Duke of Silchester as she longs to be a Duchess and he is very rich and influential.
Worse still the Duke has been injured in a terrible accident in a gun trap that has left him temporarily blind. And it is clearly Deirdre’s duty to go to him at his Scottish Castle to comfort and cheer him up as he has requested her to do.
Instead Deirdre persuades Sacha to take her place as they are so alike and, although terrified of being exposed as an imposter, she is warmly greeted when she arrives in Scotland as Deidre and does so with aplomb.
Inspired by her beautiful surroundings of lochs and moorlands she heartens the ailing but handsome Duke and soon she is in love. And he with her.
But she is filled with dread of the moment that he regains his sight and can see that she is not who she claims to be!