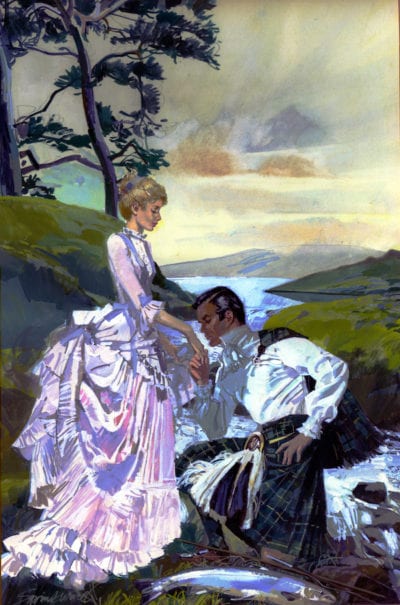 After her mother Lottie’s death in Paris, the penniless but beautiful Clova McBlane has no one to turn to, so she decides to head for Scotland to the Clan Lottie abandoned when Clova was just seven.
Then Fate intervenes and a vast inheritance from her dead mother’s former South African lover makes her a rich woman.
Nevertheless she is afraid that her kith and kin will despise her as they did her mother, who ran away from Clova’s father with a Sassenach to a life of sin and gaiety in Paris and Monte Carlo.
But to her amazement she is told that she has inherited on her father’s death the title of Marchioness of Strathblane and is now the Chieftain of the highly respected McBlane Clan, as titles and Chieftainships can be inherited by females in Scotland.
But her new wealth and power turn out to be double-edged swords.
Not only is her Clan embroiled in a bitter feud with the neighbouring McGowans but her Cousin Euan is also plotting to seize her title and her fortune from her by the foulest of tricks and dishonesty and then proclaim herself the Chieftain.
Winning the hearts of her Clan with her brave leadership and inspired oratory, she loses her own to the so-called enemy Laird of the McGowans and, if wicked and cynical Cousin Euan has his way, she will lose her life as well.