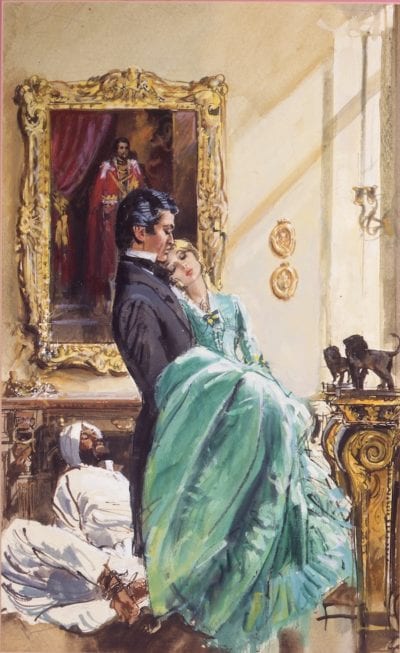 Ever since the cruel death of her beloved brother, David at the Battle of Waterloo, Lady Ilina Bury’s father, the fifth Duke of Tetbury, has taken out his grief on her and now he too has died and his will reiterates his contempt of her.
He leaves the beautiful nothing but the extremely valuable collection of jewels that had been given to his ancestor, the second Duke of Tetbury, by the Nizam of Hyderabad.
The trouble is that, although legendary, these jewels are also almost certainly mythical and Ilina and David have been searching Tetbury Abbey for them for years without any success.
All but destitute she dreads the arrival of her father’s heir and rather than be a burden, she decides to pretend that she is a paid employee of the poverty-stricken estate.
And when the handsome new Duke finally does arrive from the Far East, he is visibly disappointed by what he sees, but worse still he says that he intends to abandon the estate, all its loyal staff and close up The Abbey for ever.
He very quickly sees through Ilina’s disguise and then she shows the Duke round the dilapidated house and estate and regales him with the family’s illustrious history over many centuries.
Although she despises him, she uses all her charms to persuade the Duke to stay and do his duty for his distinguished and aristocratic family.
And, as little by little he yields, so Ilina’s heart slowly opens to love.