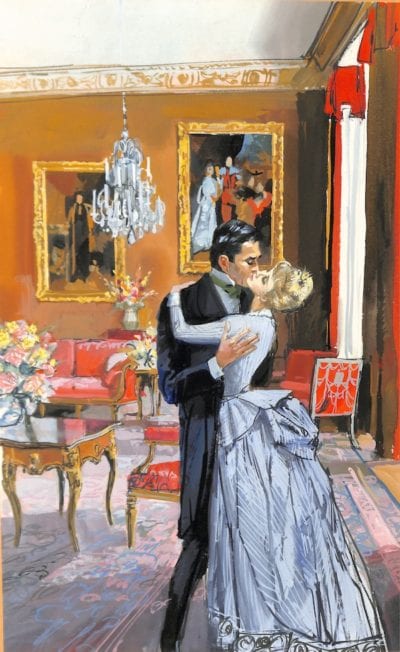 When beautiful young Lucille Winterton meets an exceedingly good-looking and very elegantly dressed gentleman while out riding, she knows instantly that this must be the notorious Marquis of Shawforde.
When the unpopular old Marquis had died the village folk, including the Wintertons, had hoped that the new Marquis would be more welcoming to them and evcn invite them to meet him at the Big House.
They are disappointed, but worse still the village is alive with gossip about the new Marquis’s decadent parties involving drinking, depravity and other ‘high jinks’.
Nevertheless the attraction between Lucille and the Marquis is irresistible and, although he is unwillingly promised to another, the pair share secret trysts until the Marquis asks Lucille to marry him even though her sister, Delia, strongly disapproves because his bad reputation could ruin hers.
The Marquis’s uncle hears of their dalliance and arrives to intervene as in his view and the family’s Miss Winterton is not grand enough to be the new Marchioness of Shawforde.
Mistaking her equally entrancing sister Delia for Lucille, Lord Kenyon Shaw becomes embroiled in a tangle of misunderstandings and, much worse, sinister intrigue.
As The Great Game of international espionage in India almost brings death and destruction to their door, two brothers and two sisters prove beyond any doubt that Love really is Invincible.