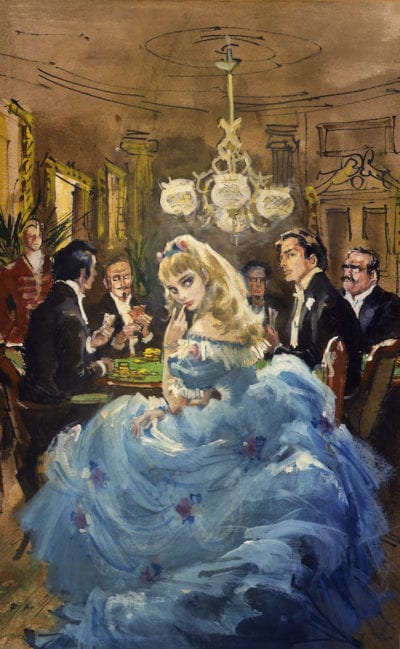 In the Black Forest Spa town of Baden-Baden for the money to be made at the gaming tables, professional gambler and Englishman Quintus Tiverton is disturbed to hear the sound of an English girl being whipped savagely in an attic room of a country inn.
‘It is none of my business,’ he tells himself, but the sound of the girl’s weeping is inescapable and he has to go and investigate.
Instantly he is captivated by Selina Wade, the blue-eyed waif he encounters and, finding that she is being exploited cruelly by a ‘domestic agency’ proprietor who is little better than a ‘madam’, resolves to save her.
Quintus Tiverton smuggles her out of the inn in the early morning and he then spends a great deal of money, which he does not have, in buying her new fashionable dresses to make even more beautiful.
And so naïve Selina finds herself posing as the gambler’s pretty sister, as Quintus Tiverton tries to marry her off to someone suitably rich amongst the international wealthy who frequent Baden-Baden in the Season .
Little does Quintus know that poor Selina’s heart is already taken.  And she only has eyes for him!
Still less does he realise that he too is falling in love.
Read more
BUY NOW
Share