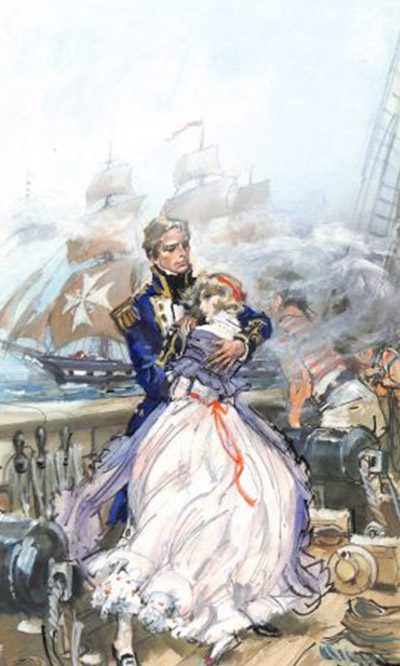 Staying at the British Ambassador’s exquisite Bay of Naples Villa, beautiful young Cordelia and her brother David, the Earl of Hunstanton, are far from the Berkshire estate that is their home.
But since the death of their parents there has been nothing to stop David realising his dream – to go to Malta and become a Knight of St. John. Except, that is, the money to finance a ship to take him there.
So when, out of the blue, a handsome, English buccaneer appears, who turns out to be none other than their cousin, Mark Stanton, he seems Heaven-sent. As Captain of a ship en route to Malta, he is in position to offer them passage to the island.
To their chagrin, however, he attempts to dissuade David from his Pilgrimage and Cordelia from her notion of joining a Convent.
But, when the siblings resist his appeals and press ahead, Mark vows to protect them both from the perils not only of David’s Maltese Crusade but also of the Napoleonic War, Barbary pirates in the Mediterranean and the scheming snobbery of Neapolitan Society.
Valiant Mark saves Cordelia from the lecherous clutches of the Duca di Belina and from the terrors or war against the French, but he cannot protect David from a noble death in battle protecting Malta, nor his own heart from falling hopelessly in love.