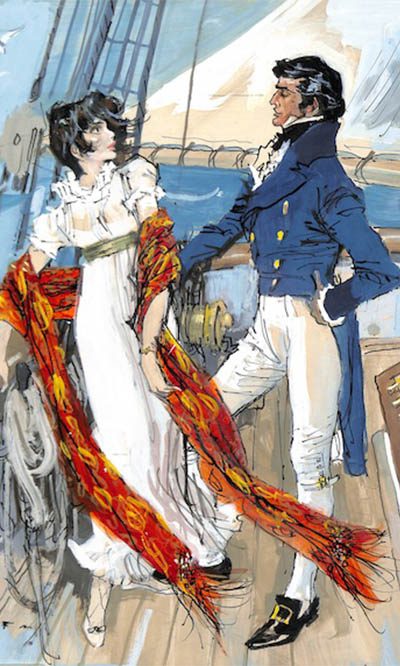 Waif-like beauty Elvina is tiny and immature after years of malnourishment and indeed she looks far younger than her seventeen years.
Weak, however, she is not. Hardened by years of beatings and abuse at the hands of her half-crazed Portuguese stepmother and sickened by her father’s constant drunken behaviour, Elvina is determined to escape Lisbon and flee to her native England.
Despite the dangers of the Napoleonic War, which is raging in Spain and Portugal, she dyes her skin to make herself look Portuguese and stows away aboard the yacht of the handsome and heroic Lord Wye, bound for London with urgent dispatches from the Duke of Wellington to the Prime Minister.
When she is discovered on board, the kindly Lord Wye believes her story that she is a thirteen-year-old fleeing the War to join her English sister and takes pity on her.
He agrees that he will take her to England in his yacht, but first he must call in to Spain for more intelligence to show the Prime Minister and the weather suddenly becomes increasing tempestuous.
And amid a terrible storm at sea and captured by the French only to fight their way free, a deep friendship under fire is kindled between Elvina and Lord Wye and soon becomes an all-consuming love when they arrive back in England.
And then other dangers to their love for each other begin to emerge.