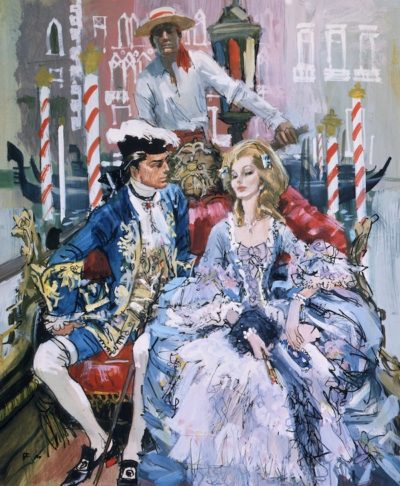 The beautiful but innocent Paolina Mansfield almost loses her life when the ship that she is a passenger on is tragically wrecked in a storm off the coast of Italy.
All aboard, including her father were lost, except just for herself and her handsome rescuer, Sir Harvey Drake, who is a descendant of the famous Sir Francis Drake himself.
Already reduced to the point of penury by her father’s addiction to endless gambling, Paolina now has nothing left in her life and no family or friends to come to her aid.
But Sir Harvey, by his own admission a ‘gentleman adventurer’, devises a grand plan for her that would save them both, as he also has many financial problems of own in Endland.
As Paolina is so beautiful and captivating, he intends to marry her off to a wealthy suitor in Italy and share the resulting riches with her.
Presented to the highest echelons of Venice Society as his sister, Paolina’s demure beauty instantly bewitches some of Venice’s most illustrious and eligible gentlemen and she is overwhelmed by amorous approaches especially from the sinister and extremely rich Duke of Ferrara.
Yet she is deeply unhappy.
Because it seems that Paolina is condemned to marry someone she does not and cannot love and she has already lost her heart to her swashbuckling but penniless saviour.