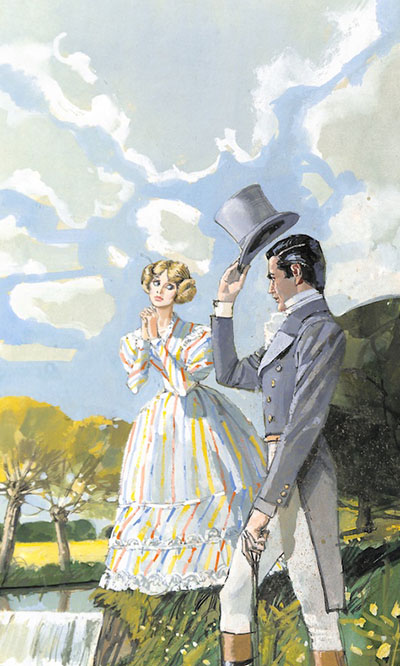 The Duke of Lavenham learns from a letter that the beautiful Lady Penelope who he finds fun and amusing, is telling her friends that she is going to marry him.
The Duke is horrified as he has no intention of marrying anyone for many years to come and he hurries to visit Penelope to discuss the matter with her and tell her that he has no intention of marrying anybody.
As he is leaving the house, a young girl sobbing hysterically jumps into his carriage and begs him to take her away.
The girl, Devinia, who is a cousin of Penelope’s, tells the Duke that Penelope has had her dog killed and she wants to die too. She is terribly unhappy and he thinks that she has been very badly treated by Penelope and her family.
The Duke takes her to his Castle in the country and it is then that he has the idea that, if he and Devinia pretend to become engaged to each other, Penelope’s father cannot accuse him of breach of promise.
But the Duke is quite certain if Penelope has told so many people of their intended marriage that her father will consider that he has damaged her reputation and will insist on him marrying her.
All this could be prevented if Devinia would become engaged to him and they could break it off as soon as it is safe to do so.
Devinia is very happy at the Duke’s Castle in the country and loves riding his horses.
How Penelope’s revenge on him is to have her kidnapped by a foreign nation and carried away to become the concubine to a ruler of their country.
And how the Duke desperately sets out to find her, is told in this exciting and romantic novel by BARBARA CARTLAND.